Reflections on the Cuban Revolution

For my readers in the United States, I hope that everyone had a pleasant 4th of July. It was always a very special holiday in my household, when I was a child. My parents were married on that date, and my oldest sister was born a year later to the date. No matter what we ate at the inevitable barbecue  on the 4th, it included watermelons carved to resemble whales and blueberry buckle, a wonderful crumb cake, infused with blueberries. Yum. Alas, my waistline no longer allows for such luxuries.

I have taken a three month leave-of-absence from posting, during which time I have completely rewritten the novel. At the suggestion of an acquisition editor at a publishing firm, I restructured the narrative of the first half of the book. It is much improved. I am certain that before I am done, it will be torn apart again and put back together. Stay tuned.

Cuba remains a hot topic in American news, due in no small part to the possibility of Rubio being nominated for Vice-President of the U.S. on the Republican ticket. Domestically, Cuba has changed little since April. Below is a contribution from www.translatingcuba.com that was posted on July 5th. I think it gives a good perspective on the past 53 years and highlights how the blockade is being used by the Castros as the excuse why the country continues to be a model of economic backwardness. 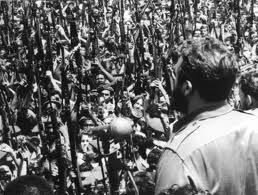 What did the triumph of the Cuban revolution accomplish? A lot: it changed what should not have been changed, destroyed all of the island’s prosperity. It focused on the benefits for the government and forgot the people; it deceived, lied and used many followers, deluded at first by promises of a false freedom and independence for Cuba.
What did they do? They made us dependent on the Socialist camp and didn’t care about the future in their eagerness to demonstrate that they can come out ahead without help from its neighbor to the North; this governmental pride oppresses us more each day.
What do they do? Nothing: to invent a blocade that always existed, mocking this measure by having the help of the Soviet Union, and today said embargo is brought out in order to explain and justify the scarcity of all that was promised.
What have they demonstrated? The lack of preparation and the ambition for power; that we are being led by incompetents or by people who love regression.
The inexplicable! An island surrounded by ocean yet there is scarcity of salt, there is scarcity of fish; 53 years of government and we have nothing.
The explicable! We are governed by an ambitious dictatorship of destructive power, with ideological methods based on the hierarchy of the Catholic Church, that force one to adhere to its beliefs or to be punished by death or to be exiled forever. They are people who do not know how to find equilibrium because they want to demonstrate their absolute perfection — and that doesn’t exist, not even nature is perfect!
Translated by: Maria Montoto
Posted by R. Ira Harris at 9:10 PM