VISIT THE POPE: IF YOU PASS GO, COLLECT $200. CASTRO GIVES PAID LEAVE TO HEAR THE POPE

If the Pope visited the U.S. and you wanted to miss work to hear him, you would take a vacation day, or develop a convenient cold and hope you didn't show up on TV for your work-mates to see. In today's Cuba, the government issued "get out of jail free" cards. The cards have the Coat of Arms of Cuba on the left hand side and the Papal Coat of Arms on the right hand side. Translated into English, the card reads as follows: The coworker_______________ attended the activity__________________ on the occasion of Benedict 16th visit, in compliance with Administrative Resolution 234, for which he should not be docked a day's salary. Simply present one of these to your boss, and your pay won't get docked: 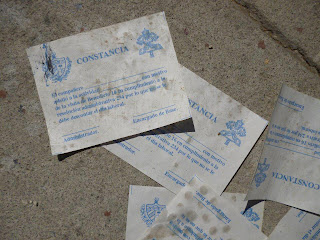 When the Pope landed in Santiago de Cuba, Raúl was there to greet him, but instead of kissing his ring (too religious?) he shook his hand and bowed gently. No confirmation of any meeting with the impatient patient, as Chávez undergoes radiation therapy in a Havana clinic. Meanwhile, there have been more than 170 dissidents in several cities of Cuba who have been detained and warned that they will be "dissappeared" after the Pope leaves Cuba according to babalú.com. Included in this number are several of the Women in White. Adjusting this number to the population of the U.S., this would be the equivalent of detaining 4,837 people in our country.

Before yesterday's mass officiated by the Pope in Santiago de Cuba,  there was an interesting incident where a man yelled out "down with Communism." He was immediately sought out and beaten and taken away. One of the men who wore a white t-shirt with a Red Cross insignia slapped him and then used the gurney he was carrying to beat him. Is this the humanitarian purpose of the Red Cross? See for yourselves in the following video:

Wednesday's mass at the Plaza de la Revolucion promises to bring several hundred thousand to hear the Pope. It will be interesting to see if he uses the opportunity to speak about the need for greater freedom.