Cuban leaders have been boastful over the years about the large number of doctors who have been trained in Cuba, resulting in world-class medicine being freely available to the population. In 2006, Cuba had one doctor for every one hundred and seventy residents, while the U.S. had one for one hundred and eighty-eight. While the doctors’ services are free, medications and medical equipment are not and are only available to those who can afford to pay. The public hospitals available to Cubans are notoriously under-stocked when it comes to medicines. Bribery to obtain better service is commonplace.

The average Cuban doctor earns $17 per month. As a result, physicians have complained and petitioned for greater compensation. The result of one such petition circulated by Jeovany Jimenez Vega resulted in his being suspended from practice since 2006. In the story featured below from www.translatingcuba.com, Dr. Vega reports about his having to support himself as a photographer. At a child’s party, which he was hired to photograph, he ran into a medical colleague dressed as a clown. She was there working as an entertainer to supplement her income as a doctor.

Certainly, working two jobs is not an uncommon phenomenon in the U.S., but for physicians to be required to supplement their income by working children’s parties, I cannot help but wonder why their expertise is not better compensated. It seems like a huge waste of effort to educate them as physicians, only to have them spend their time inflating balloons and snapping photos of kids blowing out birthday candles.

Here is the posting from www.translatingcuba.com on the evening of February 21, 2012.

Among Colleagues… Laughing to Keep From Crying / Jeovany Jimenez Vega

A few days ago I was called to cover a birthday party as the photographer. Amused by the antics of the clown, and distracted by her picturesque costume and makeup, it took me a while to recognize the familiar features of her face. It turned out to be my colleague from Artemisa, Dr. Anisia Armas, mother of a little boy, who graduated more than seven years ago.


The readers of this blog should already know that I am on a “forced break” since 2006, due to a long story that I related on the launch of “Citizen Zero.” You could think, “Wow! What a lot of bad luck! Now you’ll have to make a living through photography…” But this happened just a few days ago and confirms for me that I was never alone in this “paraprofessional” career, as we in call this almost mandatory way we Public Health professionals here sustain our families and that, according to a funny joke, becomes our real “profession” while Medicine becomes a “hobby.”


In my personal case it’s Photography, but I’ve also known doctors, dentists, nurses and technicians of all specialties and from recent graduates to workers over 30 years of service, working in their spare time in all possible trades: as shoemakers, bakers, confectioners, carpenters, masons, laundresses, seamstresses, peddlers of milk powder, ham, eggs or making yogurt, pizza, cheese … in short, inventing the saga of the Arabian Nights to survive in the black market jungle, because their salaries aren’t even enough to eat badly.

Dr. Anisia Armas’s signature on my petition regarding pay rates in the medical field. 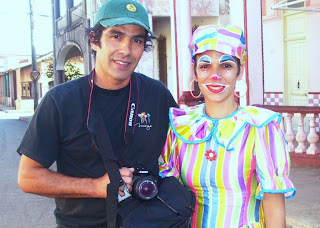 My friend — indeed, along with her husband she signed the document I sent to minister in 2005 — in order not to turn her hardships into resentments, not to lament in vain her little call to attention and food, decided, like thousands of our health professionals, on a second option. In her case she decided to make a living on the joy of children — a beautiful way of life — and their parties, the joy of creatures as she offers them a clean smile that soothes the soul. The innocence and joy of the children comes home with her after the show — I’m sure, Doctor — exhausted in body but calm in spirit, comforted by the bread honorably earned today without begging, and without have to trade her pride and dignity in exchange for nothing.