WEEKEND WITHOUT WRITING! WHAT'S A WRITER TO DO?

With the weekend off from writing, it was fun just doing whatever I wanted to. That consisted of attending the simulcast of Faust, live from the Met, followed by lunch at BJ's Grill (an unfortunate name, I think). For the past three weeks I have been under siege by a kidney stone stuck in a ureter. Consequently, the long hours of sitting were a bit uncomfortable. Surgery is scheduled for December 28th, so I wil enter the new year pain free, hopefully.

The Met broadcast would have been more enjoyable on radio, as the sets left me cold and confused. The production is updated to the 20th century, although the words that were sung were the same. However, the super title translations were altered, and the difference was disconcerting.  For example, at one point Mephistopheles, dressed in an Al Capone-era pin-striped suit, warns Faust that the horses are waiting and are impatient to leave. Furthermore, the super-title translation of Mephisstopheles's description of his hat, "la plume au chapeau" became "my Panama hat."

Yesterday, we went to an old Japanese/American orchard where persimmons abound. The orchard employs two unusual processes. One is the production of "vodka" persimmons. They take a normal, non-Fujye fruit and place 5 drops of vodka on the stem when the fruit is in a box. Each persimmon gets a dose. Then the box is put in a plastic bag and stored for a week. The result is a softening of the flesh, and a flesh that does not make the lining of the mouth feel like cotton fibers. The second process involves stringing the persimmons from a rack and drying them in the sun. Each day, a worker massages the individual fruits. The effect of this is to produce an incredible candy like flavor. Here are some photos: 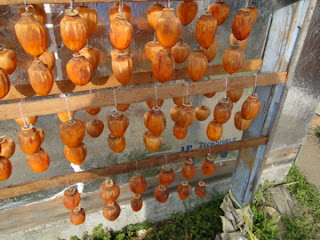 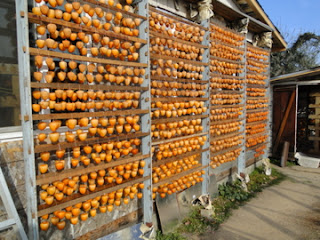 Here's one that was left on a tree, a treat for the bluest of blue birds that I have ever seen: 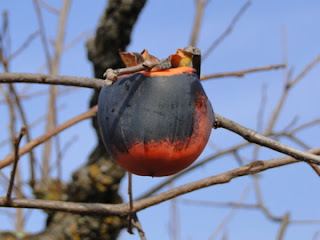