Yesterday, Yoani Sanchez, a blogger living in Cuba posted about a recent experience she and her husband Reinaldo had when they tried to board a sightseeing boat to see Cienfuegos Bay. They purchased tickets, but were denied access. Why? Because they were Cuban nationals and the revolution does not allow the workers the same freedom as visitors. I hope the words of this brave woman are illuminating.
To me it is remarkable that in a country where censorship rules, there is a small army of bloggers who are able to get their words out to the world. Here is her post, taken from www.translatingcuba.com/?p=12514, with permission, in its entirety:
Apartheid Persists / Yoani Sánchez
Translator: Unstated, Yoani Sánchez 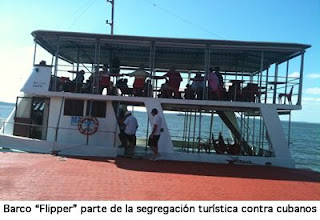 Reinaldo took the side of yes and he insisted and insisted. I, however, am of the generation that thinks ahead of time that nearly everything is prohibited, that they are going to scold me at every step and prevent me from doing anything that occurs to me. So this time the matrimonial discussion was intense. He claimed that we could board that boat to see Cienfuegos Bay from the swells of its waves; while the little voice inside me shouted that so much enjoyment could not be available to nationals. For a couple of hours I believed in my husband’s optimism and like a tropical Candide he got away with it. We went to the marina office near the Jagua Hotel and an official there sold us two tickets for the coveted boat trip. We never hid our breakneck Havana accents, nor tried to pass ourselves off as foreigners, but no one asked for identification. We felt there were already a pair of seats on board the yacht “Flipper” with our names on them and the murmur of skepticism faded in my head.
We arrived at the dock half an hour early. The sun-burnt tourists began to board the boat. Rei and I reached the spectacular corner from where we took photos of that bay as big as an ocean. The dream lasted barely five minutes. When the captain heard us talking he asked if we were Cubans. He shortly informed us that we had to go ashore, “boat rides are prohibited for nationals at every marina in the country.” Rage, anger, the shame of carrying a blue passport makes us guilty — in advance — in the eyes of the law of our own nation. A feeling of deception on comparing the official discourse of a supposed opening with the reality of exclusion and stigma. We wanted to cause a scene and cling to the railing, to compel them to remove us by force, but what would it have served? My husband dusted off his French and told the group of Europeans what was happening. They looked surprised, whispered among themselves. None of them disembarked — in solidarity with the excluded — from that coastal tour of our island; none of them found it intolerable to enjoy something that is forbidden to us, its natives.
The Flipper sailed, the wake of apartheid was visible for a few seconds and then was lost among the dark waters of the bay. The face of the musician Benny Moré on a nearby poster seemed to have exchanged its smile for a sneer. On one side of his chin was the famous refrain from one of his songs: “Cienfuegos is the city I like best…” We left that place. Reinaldo defeated in his illusion and I sad that my suspicions had triumphed. We waked along the road to Punta Gorda while an idea took shape in our minds: “If Benny had lived in these times, he too would have been thrown off — like a mangy dog — from that yacht.”
Posted by R. Ira Harris at 5:49 PM