LUCKY LUCIANO WAS A WAR HERO?

The rains have started in Northern California and their arrival is a pleasant change from the unrelenting sunshine we have enjoyed since June. The nice thing about rain is that it makes me perfectly content to be inside at my desk. When the sun is shining and the temperature is in the 80s, it's hard not to be outside enjoying the pool, walking the dogs or just driving around with the convertible top down on the Chrysler. Today was definitely not convertible weather, as can be seen by the dogs’ attire: 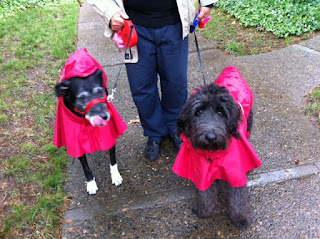 I have been reading Havana Nocturnes, a non-fiction account of the development of gambling in Cuba by the American mob, under the guidance of Lucky Luciano and Meyer Lansky. I had no idea that the plan to develop casinos was formed in the early 30s in the fertile imagination of Lansky. Unfortunately, the Depression and the war stopped his implementation of those plans until after 1945. It was back in the 30s that he had first bribed Batista, then a sergeant in the army, but someone who Lansky had decided would eventually be someone whose influence would be key to the plan. The bribery continued right up until Batista’s departure at the end of 1958.

What really surprised me was to learn that during the war Luciano was serving a long prison sentence in upstate New York with no hope of parole. US Navy intelligence discovered that the Germans had infiltrated the New York dockworkers and shipping information was being leaked to Germany, resulting in a huge number of U-boat attacks on freighters coming out of New York. The navy approached Lansky, who was a known mobster and asked if he would help combat the Nazis. Lansky being Jewish had every desire to help defeat them. He told the navy that the person who could really help was Luciano.

Lansky met with navy intelligence and Luciano in a prison in Albany to which the navy had caused Luciano to be brought. Luciano agreed to help with no preconditions. As a result, the dockworkers informed on the foreign agents and they were arrested. The number of freighter sinkings declined. After the war, the navy told Governor Dewey of Luciano’s assistance with the war effort. He granted executive clemency to Luciano, upon the condition that he be deported back to Sicily. Luciano felt betrayed, but he had no choice and boarded The Italy and sailed back to the old country. From there he traveled to Mexico and then landed in Cuba. There he met Lansky to plan the development of the Cuban casino industry.

The first draft of The Death of the White Rose is complete and I am 70 pages into the rewrite. With luck, I should get through it by the end of this month.
Posted by R. Ira Harris at 9:32 PM