HAVANA AND THE MAFIA

Part of recreating Havana in 1958 has been my research into the Mafia's involvement with legalized gambling in Havana. One scene in my new novel takes place at the Hotel Havana Riviera, a 352 room, 21-story creation of Meyer Lansky that opened in December 1957. It was the first hotel in Havana to have air-conditioned guest rooms.

The entrance was a work of art with an enormous white marble statue of an intertwined mermaid and swordfish. The marine theme was found throughout with murals by Rolando Lopez Dirube. Walls were covered in gold leaf and the roof tiles were blue like the ocean it overlooked.

Abbott and Costello appeared onstage in the showroom and Steve Allen filmed an episode of the Steve Allen Show for broadcast. Lansky's partners included Moe Dalitz, Morris Kleinman, Sam Tucker and Wilbur Clark, an owner of the Desert Inn in Las Vegas, Edward Levinson of the Fremont Hotel and Hyman Abrams and Morris Rosen who had interests in the Flamingo after Bugsy Siegel had left the scene.

Here is a picture of how it looked: 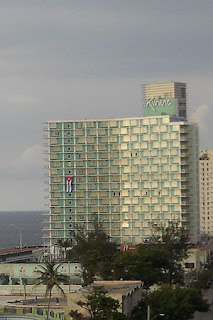